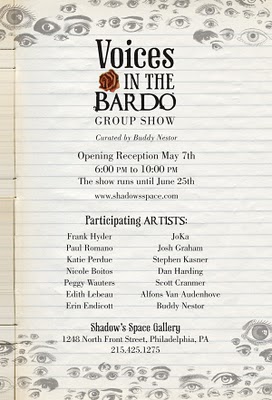 Voices in the Bardo: Curated by Buddy Nestor

Shadow’s Space is pleased to announce an exhibition featuring works that explore the depths of the Bardo, the transmigration between worlds where death in imminent and darkness begins to close in. “Voices In The Bardo” takes us on a journey through this plain of existence between life and death featuring portrayals of superheroes & villains, angels & demons, the ugly, the taboo, and varying states of human frailty and folly. Exploring various interpretations of the Bardo are artworks created by a wide range of prominent artists who explore all facets of the neo-grotesque aesthetic, and ideals incorporated within it.
Show Highlights:

Seasoned artists such as Paul Romano, Josh Graham, Stephen Kasner and Frank Hyder will punctuate the exhibition with their highly signified visual styles. Romano’s striking colorful monstrosities, Graham’s otherworldly photographic manipulations, and Kasner’s dark and haunting imagery has captured the attention of not only the artistic community, but that of multiple recording artists and music fans alike. While Hyder’s unique large-scale creations have graced museum collections worldwide. Edith Lebeau and Dan Harding’s meticulous oil paintings present polar sides of the Bardo, ethereal sweeping beauty and demonic presences. While Peggy Wauters’ bizarre, intricate sculptures and dioramas range from the whimsical to the truly horrific.